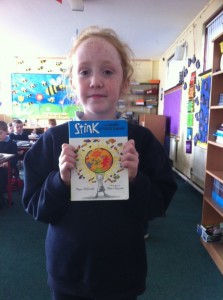 In this book Stink goes to a candy shop and buys a jawbreaker. Stink was not very happy because the jawbreaker did NOT break his jaw. When he was finished he wrote a letter of complaint and receives a huge box of sweets for free. He then gets the idea to start writing letters of complaint to lots of shops… Judy Moody is very jealous.