Scoil Bhride is dedicated to Saint Brigid. We honour Saint Brigid on the first day of February each year, through hymns, prayers, stories and art work.

Early documentary references indicate that there was a school at Crossmahon in 1826. The commissioners of Irish Education Inquiry for that year state that there was a school held in the apartments of a slated house at Crossmahon. The master was Jeremiah Cronin and twenty eight Roman Catholics attended. There was also a school in the nearby townland of Mayfield. The master Michael O’ Driscoll taught twenty four pupils in the kitchen of a dwelling house. 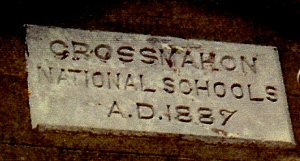 The first known schoolhouse at Crossmahon was situated at the actual cross roads, opposite the pub. Mr. Johnny Crowley, shopkeeper in Mayfield, taught in this school. This school was replaced in 1887 when the new National school for boys and girls was built. For the first ten years fees were received ranging from one shilling to twenty shillings annually per pupil.

Opening Ceremony of the new school in 1983 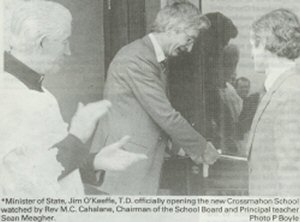 The new school was officially opened by Mr. Jim O’ Keefe,T.D., Minister of State for Foreign Affairs. Concelebrated mass was offered by the Parish Priest of Bandon, Archdeacon J.J. O’ Sullivan and Rev. T.J. O’ Sullivan who was past chairperson of the Board of Management. Other priests included Fr. Michael Cahalane,C.C., Fr. Pat Walsh, Fr. Christy Walsh and Rev. Joe Coughlan. Many other public representatives attended as well as officials from the Dept. of Education.
The Board of Management at that time were; Rev. Michael Cahalane, Mr Sean Meagher N.T., John Seaman, Gretta O’ Regan and Mary Walsh. The teaching staff included Mr. Sean Meagher, Mrs Margaret Dullea, Annette Mehigan and Ms Ann McCarthy. The school cost IR£170,000 and 120 pupils were on the roll books. After its opening, a ground’s committee was set up to plant trees, shrubs and bulbs on the 2 acre site.

Opening Ceremony of the new school extension in 2014

In March 2013, an extension to the school commenced under the government initiative of the Prefab Replacement Scheme. The construction was undertaken by MMD contractors and the extension was completed and ready for use by staff and pupils in August 2013. The official opening was performed by Mr. Simon Coveney, Minister for Agriculture and Defence, on Monday September 8th, 2014. The building was blessed by Fr. Anthony O’ Mahony C.C.